I swear that we were civilised earlier in the day.

Scones, tea and photos with the grandparents.

It’s the red carpet that brought out the worst in everyone. Or it could have been the fact that everyone was drinking at midday. That time slot is usually reserved for alcoholics but we booked it for our special day.

That day where everyone goes through heatstroke and bleeding ankles for a singular cause: looking hot.

This is why we arrived at our prom reception in the most discreet way possible. The more cameras you avoid, the less you have to maintain your beauty.

And where would the cameras least expect you to be?

The photography room. Their lair. So, that was our first stop.

In hindsight, we were wrong. I can see that now.

We walked in on Iman making the photographer vastly uncomfortable.

His date had made the oh so classy decision to not show up. Who else would flip burgers with pinky raised?

We dragged him out before the photographer burst into tears and set about making him a date. A better date. Something beautiful.

His real partner did redeem herself by promising a later appearance but I was worried.

Not that she was lying. No.

I just hoped against hope that she showed up in her McDonald’s get-up. The grease and colour would be the perfect compliment to Iman’s suit.

The reception quickly filled up with the drunk. In almost every suit, you could find a hidden flask. In every clutch, something alcoholic. They were all following the guidelines.

How do you prepare for prinks (pre-drinks)?

Who’s to blame those rowdy kids for spiking the Shloer? And who’s to blame for my chronic “drink leech” problem? No one is at fault here and I don’t need help.

I do identify as a lightweight though. Every sip from a flask was just another dice rolled. Another chance at collapsing on the spot. That’s why I needed a way out.

Our escape came in the form of the short, dateless boy. We tagged along with him to see his mysterious girl arrive.

Does this explain away why we spent an hour watching Arrested Development?

The second Saoirse did arrive eventually. After not replying to Iman for a year, this was definitely a surprise.

I can forgive her though because she is funny on Twitter (@sershajenkinson). Coincidentally, this shoutout allows me one posts worth of slander! Love you, Saoirse. x

We started off the night with some healthy segregation into boys and girls. The Radisson was obviously quite aware of the dangers of cooties. Cooties wasn’t the thing that was worrying me though. I’ve held a lot of hands in my day. What scared me was the word rippling through the line.

Two letters to strike fear into any heart. I looked at my date. The gig was up.

In the line for a venue wasn’t the ideal place to fashion a fake I.D. for the underage. The only option left for us was my passport. I was using it as I.D. so we could lay low in another country for if the fuzz were on to us.

We all waited with bated breath for the security guard to give her a good shaking.

An anticlimax and some foreshadowing was what really happened.

She was handed a meaningless form and ushered in.

The event was kickstarted with the award-winning Chicken Supreme (a champion’s dish!)

How do I know this tantalising meals name?

Well, there was a sea of regrettable activities surrounding us. A drop in this ocean was somebody going around and reviewing the main course as a vlog. No, she wasn’t staff. She was just really passionate about the fate of the luscious Chicken Supreme™.

Oliver also had one singular, burning purpose that night

It wasn’t the chicken.

His goal was to slowly invade and take the DJ’s job from him. I was able to piece together the entire story from furious updates throughout the night.

This modern-day tragedy ended with Oliver flipping the guy off and telling him to fuck himself. Understandably, the DJ didn’t listen to any more “American Boy” requests. 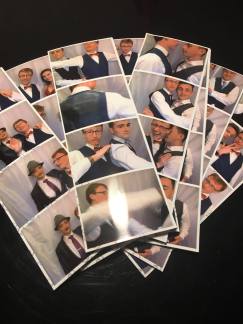 Where was I for the night? Well, based on the contents of my pockets, I lived
inside the free photo booth.

I have to congratulate myself for being thrifty but there’s hard evidence that I punched Rob so these may need to be disposed somewhere.

This is what I was doing when it happened. That minor mistake.

“Whisked away” in the words of bystanders. My first thought was the camera man who kept on taking pictures of her. Oh and saying things like “I’m gonna steal ya!”. I thought that was a little inside joke we had going. It wasn’t him either though. She had signed a form. That “meaningless” form.

Anyone who works as law enforcement is always right. They could obviously see the dangers that an underage person could face! As the clock strikes midnight, a debs turns sinister. The security guards just save the young from the truly heinous shit that can only happen after that time.

Honestly, security saved her life.  I hurried out to the little cell they’d constructed for the underage. Two security guards had a good sniff out of my water on entry and then I was just another cell mate. Rob was also there for his date and, of course, was talking about hanging himself from the chandelier. There was also Iman’s date there.

I guess underage is a loose term nowadays. She wasn’t too happy about this new definition and so, while Rob was discussing his eminent death, she was prying open windows and looking for secret latches.

Rob shut up pretty quickly when the bookcase swung open.

Ok, that was a lie but I wish.

In reality, we were in a bit of a situation. Saoirse’s next escape plan was a “smoke break”. That’s where the rest of the “underagers” were. The authority is in the right again with this power play. Keep the pure youth out of the disco and keep them chain smoking. Unfortunately, our security guard had some morality. He explained to us the dangers of smoking in broken English and opened all of our eyes! Who knew it was dangerous all this time?

Surprisingly, nothing had made me angry until that point.

Give the prison some credit! They had St Trinians AND Ghostbusters on BluRay. Ghostbusters was the obvious option here with Bill Murray smiling up at us from the box.

There was something wrong though.

A presence. A weight in the air.

It took the CD spinning up to reveal the unspeakable. It was a Trojan ghost.

The new Ghostbusters inside the old. We were now trapped in a room with Melissa McCarthy and her busting sisters. Honestly, this must be the only way they can get people to watch this movie anymore.

To make matters worse, a small Melissa civil war sparked into existence. I didn’t think that Melissa McCarthy was that controversial but I was quickly brought into line by my new commanding general (my date).

Rob didn’t even mean start this fight. We can blame the alcohol on this one.

My theory is that each type of drunk can be categorised as a Winnie the Pooh character. You’ve got the Tiggers who are the aggressively happy folk with the stripes. The anxious types would no doubt be Piglets. The only real difference between Rob and Eeyore was that he wasn’t always looking for his tail.

Rob is super responsible with his tail placement.

You can probably guess that this wasn’t how I expected the night to go.

[reaches for my soapbox]

It wasn’t my ideal night. That would have included an uprising of sorts against the security. Viva la revolución.

I do think that irregular experiences are all the more special, though.

Yes, I only get one Debs. One chance at it.

However, striving for something perfect when you have limited shots is a surefire way to end up unhappy. My advice? When a plan or a dream falls apart, follow that security guard and enjoy yourself.

If there’s no security guard? I guess that’s your chance to wallow.